2021 pharmaceutical industry is off to a strong start with mergers and acquisitions, licensing, and collaborations

In February of this year, Chinese and foreign pharmaceutical companies completed at least 30 transactions, including seven mergers and acquisitions, sixteen licensing transactions, and eleven R&D collaborations.

The majority of mergers and acquisitions occurred between non-Chinese companies

Some of the acquired companies have products approved for the market. For example, Viela Bio’s anti-CD19 monoclonal antibody Uplizna (inebilizumab-cdon) was approved last June by the FDA for the treatment of carrier targeting the AQP4 aquaporin antibody for patients with neuromyelitis optica spectrum disease (NMOSD). GW Pharma’s drug Epidiolex is the first cannabis-derived drug approved by the FDA for the treatment of patients 2 years of age and older with Lennox-Gastaut syndrome or Dravet syndrome-related seizures, as well as those of patients 1 year and older with tuberous sclerosis. Epidiolex is reported to have annual sales of approximately US$510 million.

Merck’s acquisition of Pandion is also due to Merck’s desire to expand its autoimmune system disease pipeline layout. Pandion uses TALON technology to establish a precise immunomodulator pipeline targeting key immune control nodes. Its main new drug candidate, PT101, is an engineered IL-2 mutein fused to the protein backbone, which can selectively activate and expand regulatory T cells. It has the potential to treat ulcerative colitis and other autoimmune diseases. Phase 1a clinical trials have reached the targeted safety and drug resistance goals thus far.

Beam Therapeutics acquired Guide Therapeutics mainly because of its potential in genetic, non-viral drug delivery tools. Guide has lipid nanoparticle (LNP) screening technology and has established a library of lipids and lipid preparations, which has the potential to speed up the development of gene editing treatments for tissues other than the liver.

The acquisition of Silicon Therapeutics by Roivant Sciences is based on the latter’s leading small molecule design and optimization platform based on computational physics. The platform includes custom methods based on quantum mechanics, molecular dynamics, and statistical thermodynamics for computer simulation design and optimization of small molecule drugs for challenging disease targets, thus overcoming key bottlenecks in drug discovery projects. In March, Roivant Sciences invested a further US$1.6 billion in Silicon Therapeutics.

Among the 16 licensing transactions in February, Chinese pharmaceutical companies focused primarily on treatments for tumors, but also licensed products to treat inflammation, hypertension, and others. Some Chinese companies also signed cross-border licensing out agreements. 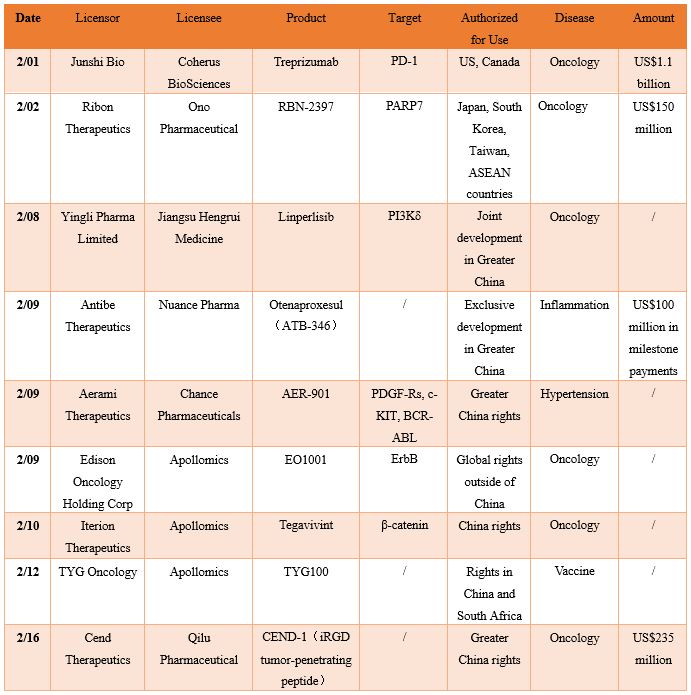 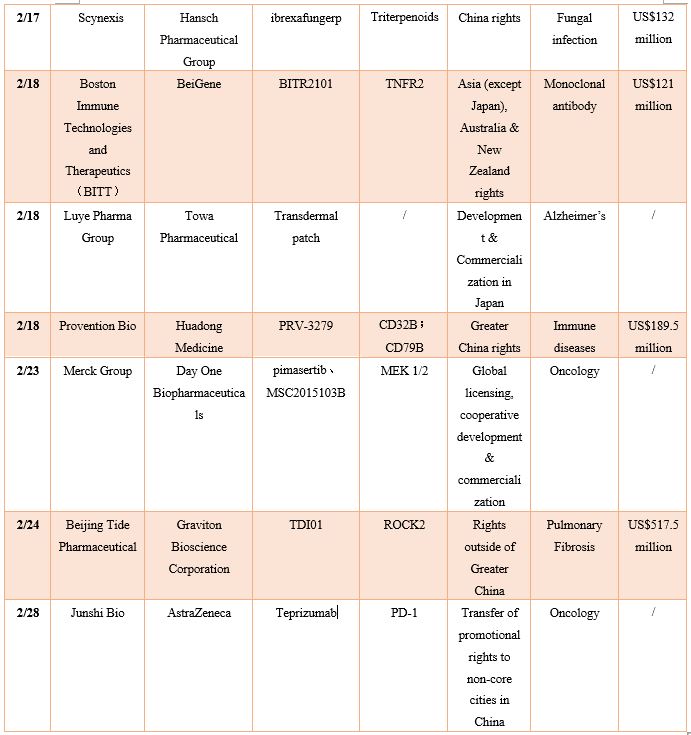 • In February, Junshi authorized the development and commercialization rights of its PD-1 monoclonal antibody Treprizumab in the United States and Canada to Coherus BioSciences. So far, all four PD-1 monoclonal antibodies independently developed and marketed in China have been sold overseas. Moreover, in order to promote the commercialization of the Treprizumab injection in China, Junshi also authorized AstraZeneca with the exclusive right to promote its indications in the field of urinary oncology in mainland China and all approved indications in non-core areas.
• Luye Pharma has exclusively authorized Towa Pharmaceutical with the right to develop and commercialize its transdermal patch for Alzheimer’s in the Japanese market.
• Beijing Tide Pharmaceutical, a subsidiary of China Biopharmaceuticals, has licensed its overseas rights and interests of TDI01 to Graviton Bioscience Corporation. TDI01 is an small molecule drug with a new target and a new mechanism. It is a highly selective Rho/Rho-related coiled-coil forming protein kinase 2 (ROCK2) inhibitor. The clinical trial application for the treatment of idiopathic pulmonary fibrosis has been approved both in China and in the United States.

• On February 8, Hengrui Medicine reached an agreement with Yingli Pharma Limited to obtain joint R&D and exclusive commercialization rights of the latter’s PI3Kδ inhibitor YY-20394 in the Greater China region. Currently, China does not have any A PI3Kδ inhibitors approved.
• On February 9, Nuance Pharma introduced Otenaproxesul (ATB-346) from Antibe Therapeutics. It is a new anti-inflammatory drug that releases hydrogen sulfide, which has good potential in its class of non-steroid anti-inflammatories.
• Chance Pharmaceuticals and Aerami Therapeutics have reached an agreement where Chance has exclusive rights to develop and commercialize Aerami’s pulmonary arterial hypertension (PAH) drug candidate AER-901 in Greater China.
• Apollomics is the Chinese company with the most licensing transactions this February. It has collaborated with Edison Oncology Holding Corp, Iterion Therapeutics, and TYG Oncology to introduce EO1001, Tegavivint and TYG100 respectively. EO1001 is a tyrosine protein kinase inhibitor (TKI), which has an irreversible inhibitory effect on EGFR (ErbB1), HER2 (ErbB2) and HER4 (ErbB4). Tegavivint is a highly effective and selective inhibitor of nuclear β-catenin, which acts mainly by binding to the nuclear cofactor TBL1, which is a downstream target of the Wnt signaling pathway. TYG100 is an antigen-specific active control of immune checkpoint (ACCI) recombinant vaccine. Through the S-TIR™ technology platform, it is compounded with the terminal amino acid sequence of immunogen G17 (gastrin).
• On February 16, Qilu Pharmaceutical and Cend Therapeutics reached an agreement for Qilu to obtain the development and commercialization rights of Cend’s drug CEND-1 in Greater China. CEND-1 is a polypeptide that can bind to neuropilin which is highly expressed on pancreatic cancer cells. The combination of the two can mediate delivery vehicles through which anticancer drugs can be delivered to the tumor tissue, thus breaking pancreatic cancer cells’ drug resistance.
• On February 17, Hansch Pharmaceutical Group introduced the anti-fungal drug ibrexafungerp from Scynexis Ibrexafungerp. The drug has been submitted in the United States for the treatment of vulvovaginal candidiasis. It is expected to receive acceptance from the FDA by June of this year.
• On February 18, Huadong Medicine reached an agreement with Provention Bio. Huadong obtained exclusive clinical development and commercialization rights of Provention’s PRV-3279 for the treatment of systemic lupus erythematosus in Greater China. PRV-3279is a humanized double-B antibody against B-cell surface proteins CD32B and CD79B（a DART® bispecific antibody）. It is in phase I clinical trials in the US.
• BeiGene introduced BITT, an antibody drug targeting TNFR2, and obtained exclusive development, production and commercialization in Asia (except Japan), Australia and New Zealand.

There were also two licensing transactions between foreign pharmaceutical companies. Ono Pharmaceutical obtained the commercialization rights of Ribon Therapeutics’ PARP7 inhibitor RBN-2397 in Japan, South Korea, Taiwan, and ASEAN countries. The drug is currently in phase I clinical trials for advanced solid tumors to assess the drug’s safety and tolerability.

These transactions spanned the entire month of February, with the Spring Festival having little effect on the enthusiasm for collaboration between enterprises. Licensed products were small molecules and monoclonal antibodies, which are mostly developed to treat tumors. Moreover, with the emphasis on rare diseases both in China and abroad, the partnership on drugs for rare diseases has gradually increased.

GlaxoSmithKline has successively expanded existing cooperation with CureVac and Vir Biotechnology to jointly develop a next-generation mRNA COVID-19 and the development of innovative therapies for the treatment of influenza and other respiratory viruses.

Eli Lilly and Rigel Pharmaceuticals reached a US$960 million collaboration to jointly develop and commercialize the receptor-interacting serine/threonine protein kinase 1 (RIPK1) inhibitor R552 for all adaptations including autoimmune and inflammatory diseases.

Sanofi has reached a collaboration with Sirion Biotech GmbH to develop a new and improved tissue-selective adeno-associated virus (AAV) vector to provide better and safer gene therapy. Finally, Roche’s Genentech and X-Chem signed an agreement to use the latter’s DEL platform to discover and develop new tumor small molecule therapies. 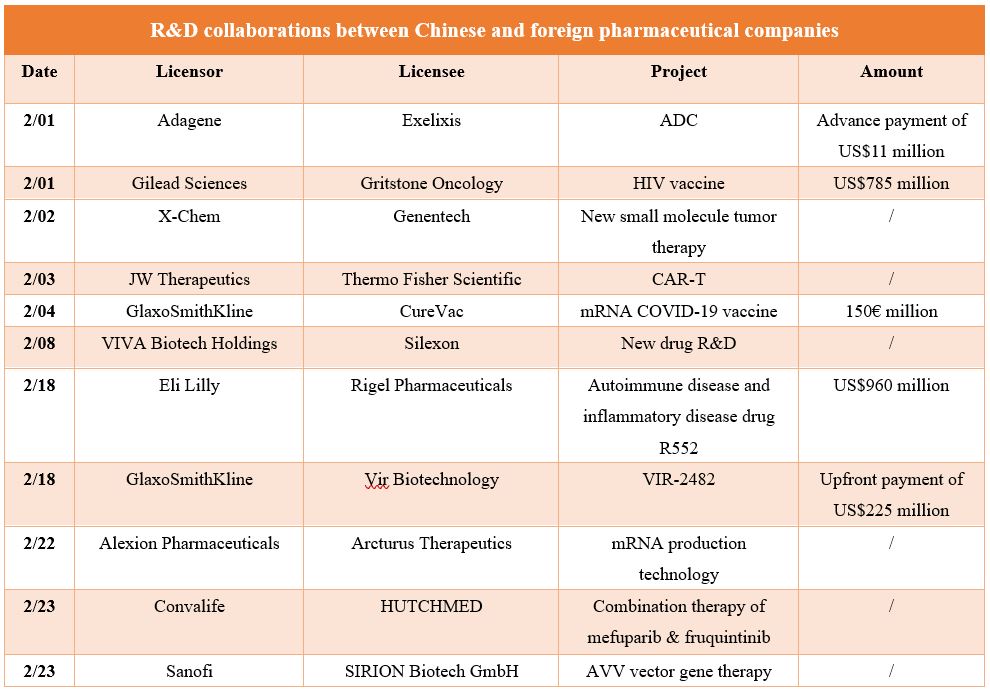 In February, oncology and autoimmune diseases were the two major areas where pharmaceutical companies made transactions. Gene therapy seems to be the next hot area. In addition to gene editing, delivery technology development has also become an area companies must overcome. Meanwhile, the development of new ADCs, CAR-Ts, bispecific antibodies, and new targeted therapy is the focus of pharmaceutical companies that wish to avoid homogenization and competition. With a number of COVID-19 vaccines now available both in China and abroad, business concerning the coronavirus has begun to decrease. However, given the important role of vaccines in the history of disease prevention and treatment, the development of vaccines remains crucial.