Last year, JAMA Network published a study showing that from 2012 to 2018 “the use of robotic surgery for all general surgery procedures increased from 1.8% to 15.1%”. The data in this study was based off of clinical registry data from Michigan from January 1, 2012, through June 30, 2018. Meanwhile, global robotic procedures still only account for 2% of all surgical procedures.

Da Vinci robotic-assisted surgery systems by Intuitive Surgical are the most commonly used, representing 80.6% market share and about US$3.7 billion in sales in 2018. They are used in procedures such as general surgery, prostatectomies, hysterectomies, cardiothoracic surgery, and transoral procedures. From 2018 to 2023, it is expected that the global market for robotic surgery systems will reach a compound annual growth rate (CAGR) of 16% with sales of US$9.7 billion by 2023. This estimate includes robotically assisted systems, instruments and accessories, and services/maintenance contracts. 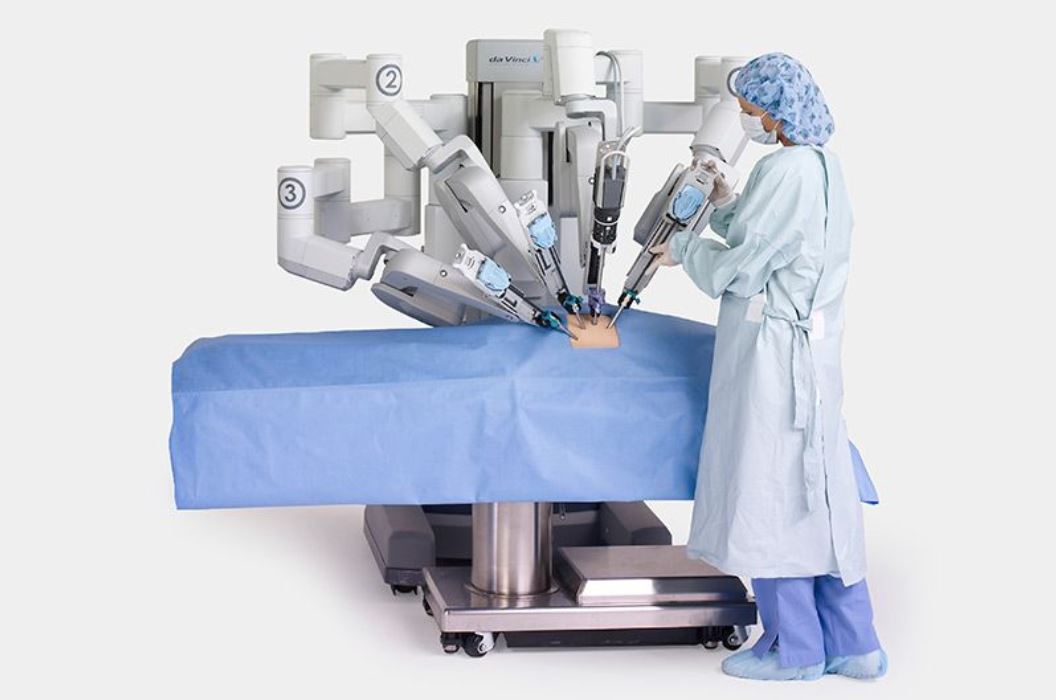 Currently, robotic surgery is primarily conducted in real-time by surgeons with the robots assisting. However, there is growth potential for clinical AI and machine learning to become more of a factor within robotic surgery. Rather than the surgeon guiding the robot, the robot would be guided by AI algorithms. In 2016, the Smart Tissue Autonomous Robot (STAR) was able to perform surgery with greater accuracy than human surgeons. However, in order for AI robotic surgery to become more widely used, it must give either technical or financial advantages over conventional surgical techniques.

Another potential developmental direction is remote surgery. This method would combine autonomous surgical robots with 5G networks to provide assistive or fully automated support. The element of 5G networks is critical as they provide 10 times the bandwidth compared with 4G, thus decreasing latency. Remote surgery could help to mitigate issues such as an anticipated healthcare staffing gap and continuing post-pandemic popularity of telemedicine.

In China, there are already certain competitive advantages in the field of 5G and AI. Thus, fully automated surgery and remote surgery may be the direction for Chinese robotic surgery companies to break through the competitive international landscape.

In 1985, surgeons performed the first robot-assisted surgical procedure, using the Puma560 to complete a neurosurgical biopsy. In 1991, ROBODOC, was the first active robotic system to receive formal FDA approval. However, due to its bulky size and inability to adapt to individual human body structures, this approval was eventually revoked by the FDA. In 1994, the Automated Endoscopic System for Optimal Positioning (AESOP) became the first surgical robotic assistant approved for human use. It operated by giving the surgeon camera and voice control to perform laparoscopic procedures. AESOP was eventually relaunched as the ZEUS operating system, which is the predecessor to modern robotic surgery systems. ZEUS had three robotic arms: one to hold the laparoscope and two operating arms that the surgeon controlled from a remote console. Finally, in 1999 Intuitive Surgical released its first robotic surgery system, called the da Vinci Standard. It was approved by the FDA in 2000 for general laparoscopic surgery. The da Vinci platform represented a three-to-four armed system and was the main competitor to ZEUS in the field of robotic surgery until 2003 when Computer Motion and Intuitive Surgical merged.

Meanwhile, in China, robotic surgery systems had a later start to their development. In the initial development stages, universities, hospitals, and other scientific research institutions collaborated together, rather than private companies. In 1997, the Chinese Naval General Hospital and Beijing University of Aeronautics and Astronautics jointly developed the first medical surgical robot. Then, in 2010, Tianjin University, Nankai University and Tianjin Medical University General Hospital jointly developed the “McroHand A” laparoscopic robot. Also in 2010, TINAVI Medical Technologies’ first-generation orthopedic surgical robot was approved by the NMPA. TINAVI recently released their third-generation robot TIANJI. 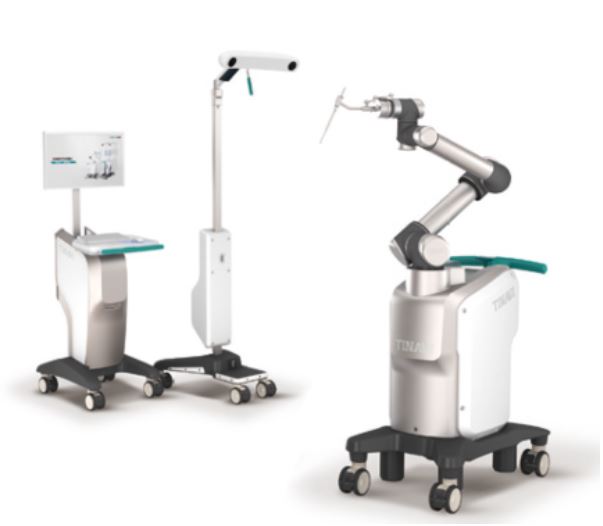 With the influx of policies supporting innovation, such as the 12th five-year plan in 2011, and venture capital investment, in recent years, a number of companies developing surgical robot platforms have emerged in China. Some examples are MicroPort, HOZ Medical, Si Zhe Rui Smart Medical Equipment, Jointech, Sinovation Medical, and WEMED.

As previously mentioned, Intuitive Surgical is the industry leader of soft tissue surgical robots with its da Vinci model. The da Vinci system holds the highest market share in the world. In 2019, the number of da Vinci robotic operations in the United States reached 880,000, of which general surgery accounted for 48%, gynecology accounted for 32%, urology accounted for 16%. By the end of 2020, the number of da Vinci systems in China exceeded 200. This is due to the development of Chinese soft tissue robots getting a later start on development. Most companies in this category are still in the stages of research and development, animal experiments, and clinical trials. Research is trending toward laparoscopic surgery systems with flexible robotic arms. Edge Medical Robotics’ laparoscopic surgical robot is relatively advanced in development and is expected to fill gaps in the domestic Chinese market. 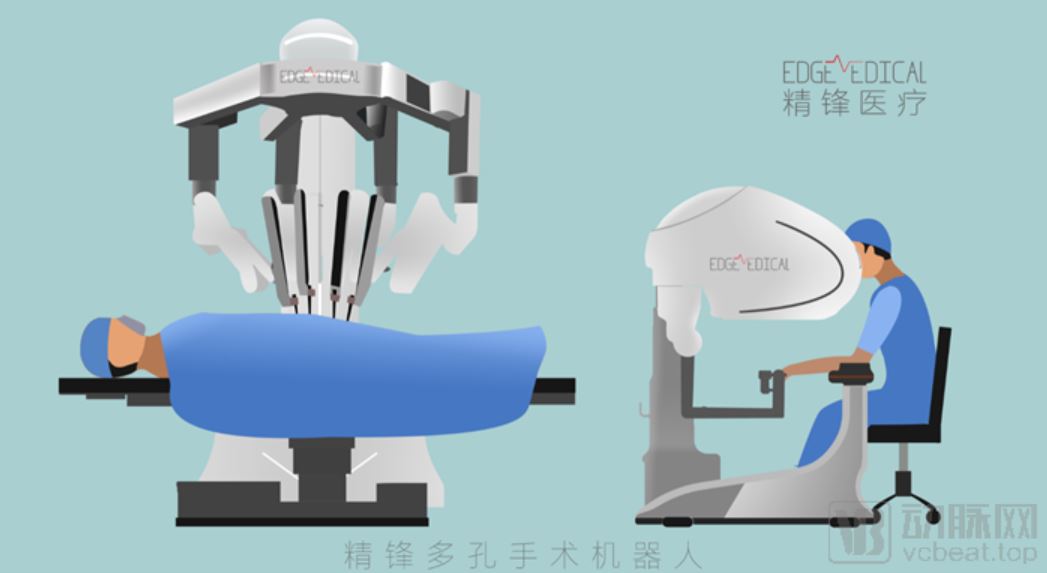 To avoid direct competition with Intuitive Surgical, most Chinese companies focus on developing positioning and navigation robots, particularly for orthopedics and neurosurgery. Medical technology giants such as Medtronic, Johnson & Johnson, Stryker, Zimmer Biomet, and others have joined them and achieved rapid deployment through licensing and acquiring innovative surgical robot companies. The number of Chinese surgical robot products that have been released has reached 9, including products from TINAVI, Remebot, Sinovation Medical, and HOZ Medical.

As can be seen, even though the da Vinci system occupies such a large part of the market, due to multiple options for surgical treatment, other robotic surgery products still have to develop.

Although remote robotic surgery has been in development for more than 10 years, due to network bandwidth limitations, there was the potential problems of signal freezes, slow feedback, and no real-time processing. In 2019, with the support of China Telecom’s 5G network and Huawei, the Robot Teleoperation Center at Beijing Jishuitan Hospital completed the world’s first 5G orthopedic surgery using remote robotic surgery. This technique requires ultra-high-definition images (with a resolution of at least 4K) to allow doctors perform precise operations.

In addition, remote surgery needs to be simultaneously displaying the feeds of life monitors, electrocardiographs, defibrillation monitors, and high-definition video equipment. Real-time synchronization is required to ensure operational safety. This requires the network bandwidth to reach 15Mbps-1Gbps, with a delay of no more than 1ms to meet the relevant operational requirements. These can only come from high-bandwidth and low-latency 5G networks.

China’s large-scale 5G network construction has prepared a strong foundation for remote robotic surgery. It owns 1/3 of the world’s 5G patents, leading the process of 5G technology, standards, industry, and commercial use. As of December 2020, the total number of 5G base stations globally was more than 1.02 million, with China having more than 718,000 5G base stations. This results in full coverage of 5G networks in all prefecture-level cities and larger.

Under the promotion of the National Health Commission and the Ministry of Industry and Information Technology, more than 20 hospitals across the country have participated in the creation of orthopedic surgical robot application centers. This could drive more than 300 hospitals to pilot projects to improve the quality of medical services and implement a hierarchical diagnosis and treatment system. 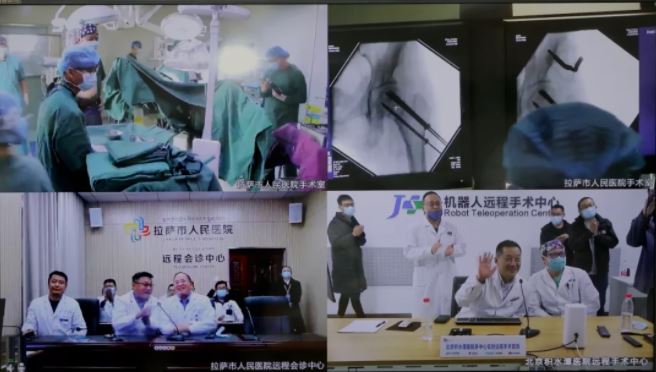 Current robotic surgery platforms only assist surgeons in performing clinical operations and cannot perform operations independently. With the rapid development of artificial intelligence, this technology could achieve automatic diagnosis and planning. AI robotic surgery could collect and analyze data while working, then make real-time responses and improvements. With the increase in tasks and information collection, the algorithm efficiency of AI surgical robots will also increase. Some Chinese enterprises and scientific research teams have begun to explore this developmental path.

With the help of image recognition, image decomposition and fusion, image tracking, and other technologies, visual feedback on the screen can be effectively applied and combined with surgical planning and motion programming. At present, it is too early for AI robotic surgical systems to become widespread. However, regular experimentation will accelerate its arrival on the greater market.

Surgery has undergone historical changes from traditional open surgery to laparoscopic surgery to surgical robots. Integration with AI, 5G and other information technologies may be the precursor to the next surgical revolution.