The drug is an innovative drug TACl-Fc fusion protein for the treatment of B-cell mediated autoimmune diseases. It is meant to be combined with conventional treatment, and its lead indication is systemic lupus erythematosus (SLE).

Telitacicept targets and neutralizes two cell-signaling ligands, B-cell lymphocyte stimulator (BLyS) and and a proliferation-inducing ligand (APRIL), to down modulate the overexpression of B-cells implicated in autoimmune diseases.

Telitacicept has been approved for the treatment of systemic lupus erythematosus and has a broad market in China.

There are a large number of patients with systemic lupus erythematosus in China and around the world. Currently, however, there is no effective curable treatment, and the available treatment methods have limited efficacy or satisfactory safety profile. The most commonly used drugs to control the symptoms of SLE include corticosteroids, antimalarials, non-steroidal anti-inflammatory drugs, immunosuppressants, and biological drugs. Among these drugs, although high doses of corticosteroids and immunosuppressive agents may be effective in severe cases of SLE, patients often develop serious side effects and may relapse. Side effects can include weight gain, easy bruising, thinning of bones, high blood pressure, diabetes, and increased risk of infection. In addition, treatment with immunosuppressive agents may lead to serious infections and an increased risk of certain types of cancer.

In China, there were about 1 million patients with SLE in 2019. It is estimated that those numbers will increase to about 1.1 million by 2030. According to Frost & Sullivan’s data, it is estimated that the global SLE biotherapy market will grow at a compound annual growth rate (CAGR) of 26.8% from US$800 million in 2019 to US$10.8 billion in 2030.

At present, there is only one bio-therapeutic innovative drug GlaxoSmithKline’s Benlysta (belimumab) that can be used to treat SLE in the Chinese market. Telitacicept is the second new biological agent for SLE approved in China in the past 60 years.

Telitacicept has demonstrated its potential to become a best-in-class biological therapy for the treatment of SLE in clinical trials. It has two major competitive advantages: firstly, the optimized structural design of telitacicept has improved biological activity and productivity. The innovative dual-target mechanism has shown a more significant pharmacodynamic effect than the BLyS single-target mechanism and thus a stronger curative effect. Secondly, Telitacicept is designed using human amino acid sequence to minimize potential immunogenicity.

SLE is just one of the indications for Telitacicept. RemeGen is exploring its potential to solve six autoimmune diseases including neuromyelitis optica spectrum disorder (NMOSD), rheumatoid arthritis (RA), IgA nephropathy (IgAN), Sjögren’s syndrome (SS), multiple sclerosis (MS), and myasthenia gravis (MG). Among these diseases, the indications for rheumatoid arthritis have progressed rapidly and are in phase III clinical trials.
In addition to Telitacicept, RemeGen also has an ADC core product, Disitamab vedotin, which has made rapid progress and has a broader prospect across various solid tumor types.

An anti-HER2 antibody-drug conjugate (ADC) has long been a focus of RemeGen’s research and development, with more R&D invested than even that of Telitacicept. Disitamab vedotin is a highly targeted cancer therapy that directly transports chemotherapeutic drugs to tumor cells but leave healthy cells intact. RemeGen has considered to be one of the leading companies on the ADC track in China. 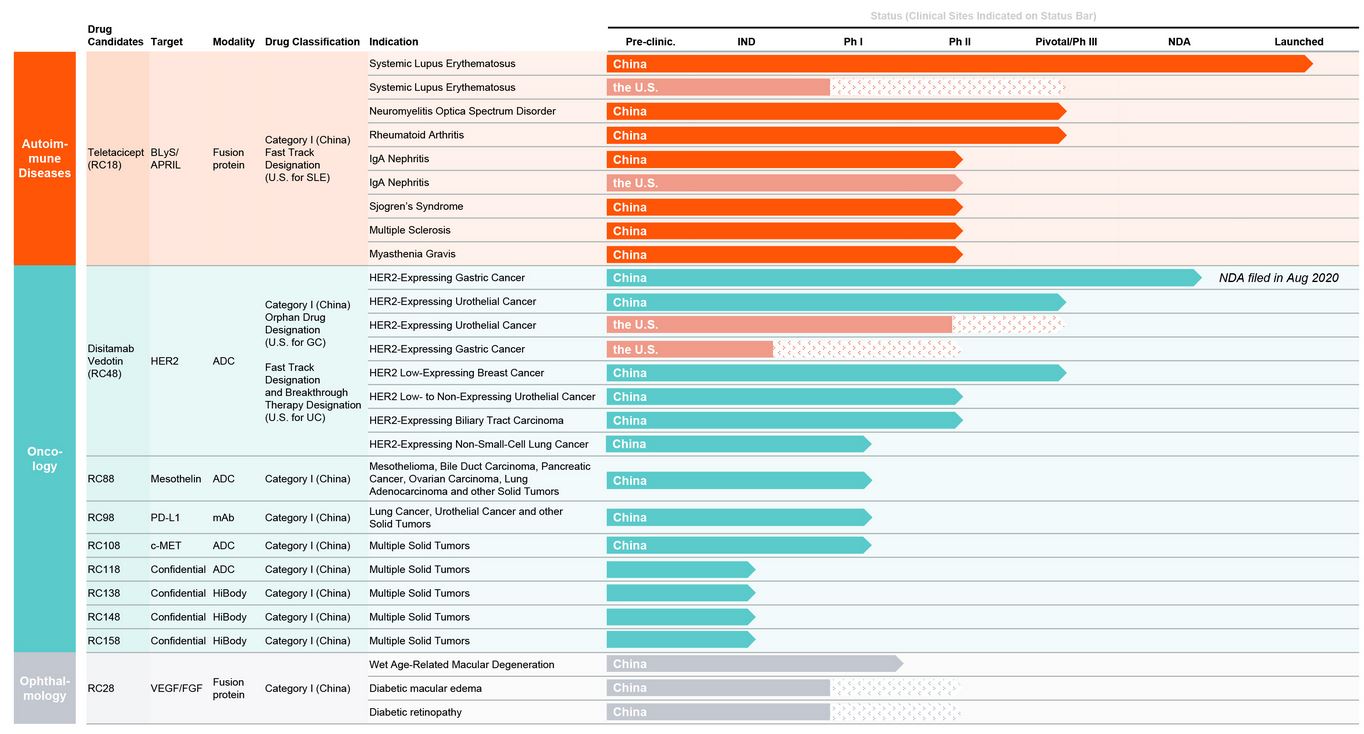 RemeGen has made relatively rapid progress on disitamab vedotin progress in research and development. It is the first ADC approved for clinical trials in China.

There is a new type of humanized HER2 antibody and a toxin-loaded methyl auristatin E (MMAE) in disitamab vedotin. They are coupled to each other through a linker that can be cleaved by cathepsin and have an optimized drug-antibody ratio. The anti-HER2 antibody allows disitamab vedotin to selectively deliver the anticancer agent MMAE to HER2-expressing tumor cells. The linker is cleaved in the presence of lysosomal proteases, releasing the loaded MMAE to kill cancer cells.

In August 2020, RemeGen submitted an NDA application for disitamab vedotin. The indication was for HER2 overexpression in locally advanced or metastatic gastric cancer that has received at least 2 systemic chemotherapy after recurrence/metastasis. It was subsequently included in priority in September Review and approve procedures.

In December 2020, disitamab vedotin was granted breakthrough therapy designation by the State Food and Drug Administration in China.
In China, there are currently only two ADC products, namely Roche’s Kadcyla and Takeda’s Adcetris. They were approved for listing in January and May 2020, respectively.

However, there are many ADC competitors under development, and there are at least 26 ADCs in clinical trials in China. In addition to HER2, other targets of ADC products include c-Met, EGFR, Trop2 and CD20.

In addition to RemeGen, Chinese companies that have deployed HER2 target ADCs include NovoCodex Biopharmaceuticals, TOT Biopharm, Kelun Pharmaceuticals, and Hengrui Pharmaceuticals. Kadcyla and Adcetris have the advantage of being first on the market, but many innovative drug companies are catching up. This will likely bring a lot of pressure to RemeGen.

After all, RemeGen is a biopharmaceutical company that has not yet generated revenue.

RemeGen was established in 2008, completed its reorganization in 2019, and was restructured into a company limited by shares in May 2020.
In December 2017, RemeGen, announced the completion of RMB 1 billion of financing. Then, in December 2019, RemeGen completed a RMB 100 million subscription from PAG.

In March 2020, RemeGen completed a new round of financing of USD$105 million, led by Eli Lilly Asia Fund and Qingchi Capital. Many internationally renowned investment institutions participated as well.

At the end of June 2020, RemeGen submitted an IPO application to the Hong Kong Stock Exchange. Fidelity International, Hillhouse Capital, Matrix Partners China, E Fund and 19 other top global investment institutions were among the investors, purchasing a total of US$227.5 million in shares.

RemeGen’s IPO with its total funding of approximately US$590 million was the world’s largest biopharmaceutical IPO in 2020. Its current value on the Hong Kong stock market is operating above HK$40 billion.