As spring arrived in March, cross-border transactions in the life sciences industry entered an additional month of growth. According to statistics from “Member Capital”, there were 13 Chinese asset licensing in transactions and 4 licensing out transactions last month. The United States is the country with the most cross-border collaboration agreements with Chinese companies this month, followed by the United Kingdom and South Korea. 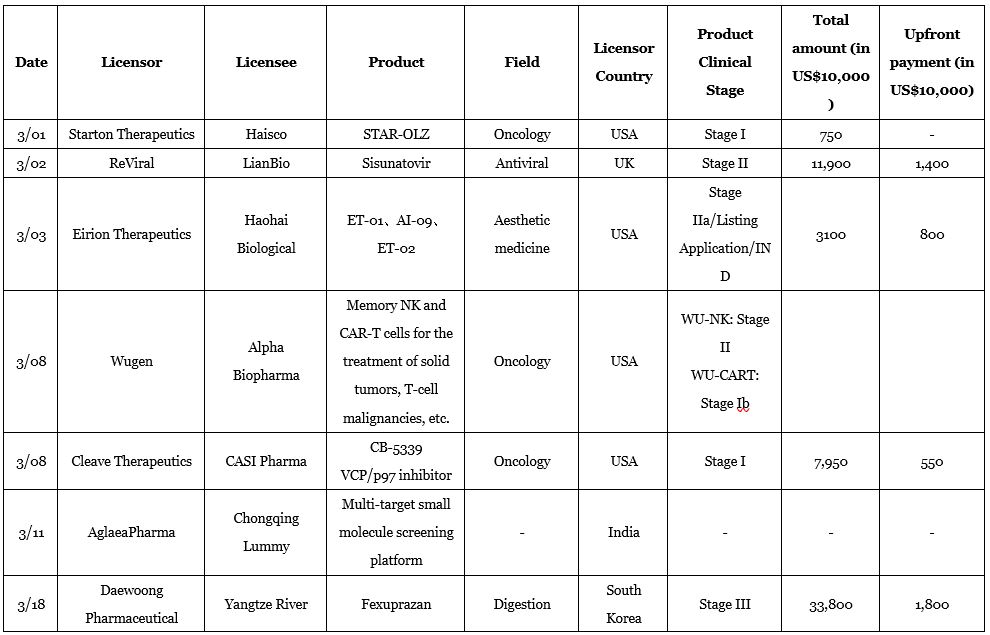 1. March 1: Starton Therapeutics granted Haisco the exclusive right to develop, register and commercialize its product under development, STAR-OLZ, in mainland China.
STAR-OLZ is a once-a-week transdermal drug delivery system intended to treat nausea and vomiting caused by chemotherapy and PARP inhibitors.
The total licensing deal comes to US$7.5 million, including upfront and potential development and registration milestone payments. In addition, if the product is successfully approved in mainland China, Haisco will pay Starton a royalty fee based on the project’s annual net sales there.

2. March 2: LianBio has reached an exclusive cooperation and licensing agreement with ReViral. Liantuo Bio will develop and commercialize Sisunatovir in Mainland China, Hong Kong, Macau, and Singapore. In return, LianBio will pay ReViral an upfront payment of US$14 million in cash, as well as development and commercial milestone payments of up to US$105 million. In addition, ReViral will obtain tiered sales royalties from the net sales of drugs sold in the licensed regions.
Sisunatovir is an oral fusion inhibitor designed to block RSV replication by inhibiting the fusion of the virus and host cells mediated by the RSV-F protein. It is currently undergoing phase II clinical trials in children and adults who are immunocompromised. Recently, the US FDA granted Sisunatovir fast track designation. This designation is for drug candidates that treat serious conditions and meet an unmet medical need.

3. March 3: Haohai Biological signed an equity investment agreement and a product licensing agreement with Eirion Therapeutics. Haohai will invest US$32 million in a Series A Preferred Stock into Eirion along with exclusive licenses that will be for all of Eirion’s products for the territory of China in exchange for an upfront payment in the amount of $8 million. The investment will comprise approximately 13.96% of Eirion’s equity and thus a minority stake.
The two companies have signed two product licensing agreements: one for Eirion’s neuromodulator-based product candidates, ET-01 (topical) and AI-09 (injectable) for aesthetic indications; and the second for Eirion’s small molecule product candidates, ET-02 (topical) and ET-03 (oral), which are intended for the treatment of hair loss and hair greying.

6. March 18: Daewoong Pharmaceutical announced that it reached a cooperation and licensing agreement with Shanghai Haini Pharmaceuticals, a subsidiary of Yangtze River Pharmaceutical Group, for Daewoong’s product, fexuprazan. According to the agreement, Haini is responsible for the clinical development and commercialization of Fexuprazan in China, Yangtze River is responsible for the domestic sales of the drug, and Daewoong Pharmaceuticals will receive up to KRW 380 billion in cooperative payments, including KRW 20.4 billion in milestone payments.
Fexuprazan is a novel potassium-competitive acid blocker (P-CAB), which reversibly blocks the proton pump that secretes gastric acids located in the cannalicular membrane. It is a next-generation of proton pump inhibitors (PPI), which are widely used for gastroesophageal reflux disease (GERD). In May 2020, Daewoong Pharmaceutical announced the Phase III clinical trial results of Fexuprazan in South Korea which showed a 99% of mucosal healing rate at week 8 and was well tolerated in the patients. Currently, Daewoong is carrying out Phase III clinical trials of Fexuprazan in China.

7. March 19: Shandong BoAn Biotechnology Co. and Horizon Discovery signed a commercial license agreement for BoAn to be authorized to use the Horizon’s CHOSOURCETM CHO-K1 GS gene knockout expression platform to develop and commercialize biological preparations. The CHOSOURCE platform has a successful record in the discovery and development of biologics, including the application of transient expression in research and early development, and the generation of stable cell lines for clinical and commercial production of cGMP-compliant biologics.

8. March 24: Sino Biopharma’s board of directors announced that the company’s subsidiary C-Lab International Limited entered an agreement to acquire Softhale for a price of US$110 million and would make additional payments related to regulatory and commercial milestones. Softhale is a private company in Belgium dedicated to the development of products for the treatment of respiratory diseases.
The announcement stated that through the development of next-generation inhaler technology to provide chronic obstructive pneumonia (COPD) and asthma patients with more effective combined medicine and equipment products, covering different groups of COPD patients to supplement the coverage of the Group’s existing inhalation medicine equipment product portfolio. Consolidate the Group’s leading position in the field of respiratory therapy.

March 29: Tarsus Pharmaceuticals and LianBio announced a strategic partnership to develop and commercialize Tarsus’ product TP-03 in the Greater China region. LianBio will obtain the exclusive right to develop and commercialize TP-03 in Greater China, and Tarsus will receive an initial payment of US$15 million. Tarsus may also receive development and commercialization milestone payments of up to US$185 million US, and a near-term clinical milestone payment of US$45 million is expected in the next 12 months. Tarsus will also be eligible for low double-digit royalties based on sales of TP-03 in the Greater China region, and will receive a minority stake in LianBio Ophthalmology, which will depend on Tarsus achieving certain development and commercialization milestones.
TP-03 is a first-class research drug for the treatment of blepharitis and meibomian gland diseases, which have serious treatment needs. Tarsus plans to use this recent funding to support the development of TP-03 and its strong product line in blepharitis and MGD, including the TP-04 and TP-05 plans for areas with unmet medical needs including rosacea, Lyme disease, and malaria.

10. March 31: 3D Med announced that the company has obtained the exclusive license for the development, production, and commercialization of the new generation of anti-CD47 monoclonal antibody IMC-002 tumor indications in Greater China from ImmuneOncia Therapeutics. According to the terms of the agreement, 3D Med will pay a down payment of US$8 million and a development and commercial milestone payment of up to US$462.5 million in the future, and pay a certain percentage of sales royalties based on IMC-002’s annual net sales in Greater China.
IMC-002 is a new fully humanized IgG4 monoclonal antibody drug currently in phase I clinical trials. By blocking the CD47-SIRPα interaction, it promotes the phagocytosis of tumor cells by macrophages. Existing pre-clinical data show that IMC-002 has a strong affinity for human CD47, which can maximize the efficacy without binding to red blood cells or causing anemia and other common side effects of other CD47 inhibitors under development.

According to “Member Capital”, there were four asset sales items in licensing transactions in March, three of which were in the field of oncology. 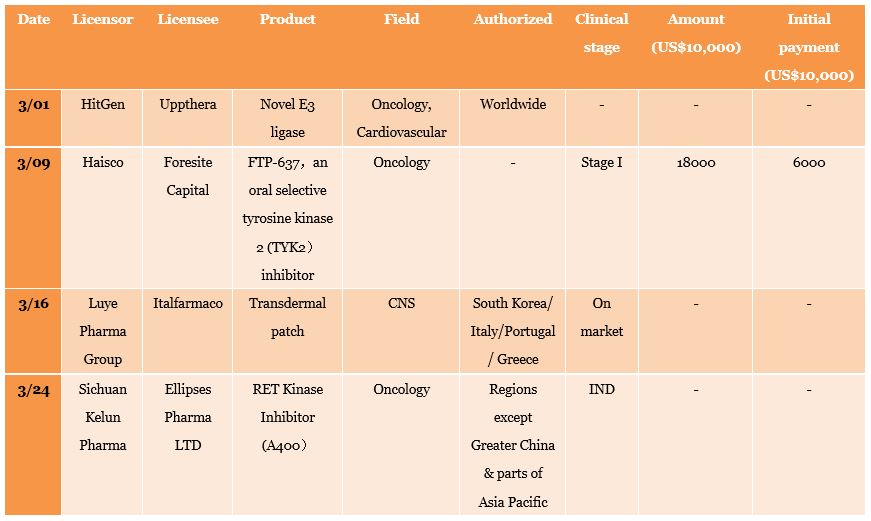 1. March 1: HitGen, based out of Chengdu, announced that it has reached a new drug R&D cooperation with Uppthera, with an intent to discover new structures of small molecule compounds and E3 ubiquitin ligase. HitGen will use its advanced technology platform centered on the design, synthesis and screening of DNA-encoded compound libraries to screen lead compounds for specific targets and transfer these lead compounds. Based on this agreement, HitGen will receive the first payment and subsequent milestone payments; however, the specific amount has not been disclosed.

2. March 16: Luye Pharma (Switzerland), a subsidiary of Luye Pharmaceutical Group, reached an agreement with Italfarmaco Group to grant the latter the exclusive right to commercialize transdermal patches in four European countries: Germany, Italy, Portugal and Greece. Italfarmaco will also have the priority right to commercialize the product in Chile and Vietnam.
Italfarmaco will make an initial payemet to Luye Pharma after the agreement is signed, and make additional payments when certain sales milestones are reached. Luye Pharma will also receive royalties from Italfarmaco.
This transdermal patch is used to treat mild and moderate dementia related to Alzheimer’s disease. It is an innovative preparation independently developed by Luye Pharmaceutical and has entered the market application stage in Europe. The patch is an important strategic complement to Italfarmaco’s product portfolio in the field of central nervous system therapy, where the company has extensive experience.

3. March 25: A subsidiary of Kelun Pharmaceutical Co., Ltd. will exclusively license the innovative small-molecule tumor-targeted RET kinase inhibitor project (A400) to Ellipses in Europe, the United States, and other regions. Kelun will retain Greater China, South Korea, Singapore, and Malaysia. The two parties will carry out development, commercialization, and other activities in their respective regions, and use the data in their respective regions to support the global research and development of the project.
The A400 project is a small molecule selective targeting RET kinase inhibitor with independent intellectual property rights developed by Kelun. The project formally submitted an IND application to NMPA in March 2021 and has a number of international patents. Pre-clinical studies have shown that A400 has good in vivo and in vitro kinase inhibitory activity and selectivity, it has advantages in animal blood/brain exposure and other aspects, and it is effective for a variety of clinical drug-resistant mutations that have been reported in the clinic.
A400 has the potential to overcome clinical drug-resistant mutations and improve the clinical efficacy of brain metastases. The signing of the license agreement will help the global development speed of the RET kinase inhibitor project. After the listing, it will provide new treatment options for global cancer patients and will further enhance the internationalization of the company’s innovative projects.