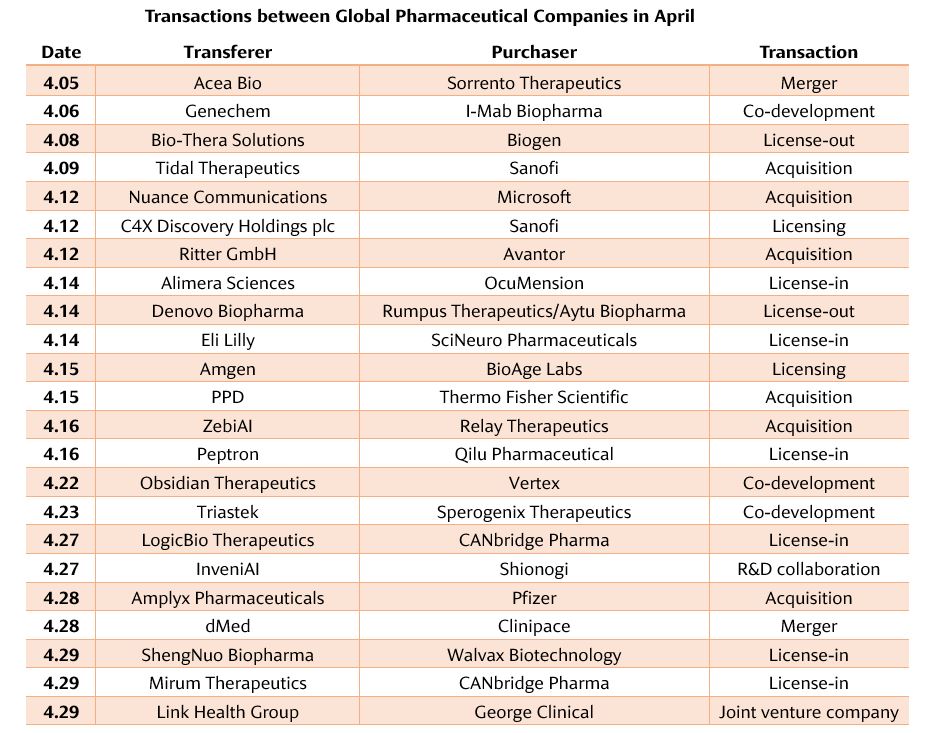 In recent years, large international CROs have been part of mergers and acquisitions, participating in both horizontal and vertical integration, thereby opening up new prospects for diversified development. For example, in 2016, Aimex merged with Quintiles to establish the world’s largest CRO company. In 2017, INC merged with inVentiv and became the world’s second largest CRO company at the time. That same year, LabCorp acquired Chiltern after acquiring Covance in 2015 and became a full-process CRO.
The acquisition of PPD by Thermo Fisher represents its expansion both upstream and downstream of the value chain within the CRO industry, and the horizontal integration of the global CRO giants. In 2017, Thermo Fisher entered the CDMO field by acquiring Patheon for US$7.2 billion.

In addition, in April, the Chinese CRO company dMed merged with the American CRO company Clinipace to become a globally differentiated medium-sized CRO. It will compete with leading CROs in worldwide. Leading Medical and George Clinical signed a strategic investment agreement, with the two parties investing in the establishment of a clinical CRO joint venture, Leading George Clinical Research.

A theory why Microsoft bought Nuance Communications is that the former has taken a fancy to the latter’s leading position in medical voice intelligence. It is reported that the Dragon Medical intelligent speech platform under Nuance is based on a cloud-authenticated speech recognition solution. This provides consistent and personalized clinical documents between solutions, platforms and devices. Currently, more than 500,000 doctors worldwide use its speech recognition technology. It is used in 77% of hospitals in the United States.

This acquisition is just a small next step for Microsoft to become more involved in the medical industry. In 1999, Microsoft began to invest in the health information website WebMD, and subsequently acquired the medical database software Azyxxi (2006), the health information search engine Medstory (2007), and Sentillion, a software manufacturer in the healthcare industry (2009). In 2014, Microsoft partnered with medical technology company Becton Dickinson to build a new incubator focusing on health and medical technology startups. In 2017, it launched the Healthcare NExT medical project with the University of Pittsburgh Medical Center. In 2018, Microsoft promoted its medical chatbot service Healthcare Bot. The same year, a new department called “Microsoft Healthcare” was established. In 2020, Microsoft Cloud for Healthcare was officially launched. The platform integrates Microsoft 365, Dynamics, Power Platform, and Azure products to assist the medical industry in supporting digital capabilities such as medical-patient interaction, organizational collaboration, and program development.

The Popularity of Licensing Transactions Continues 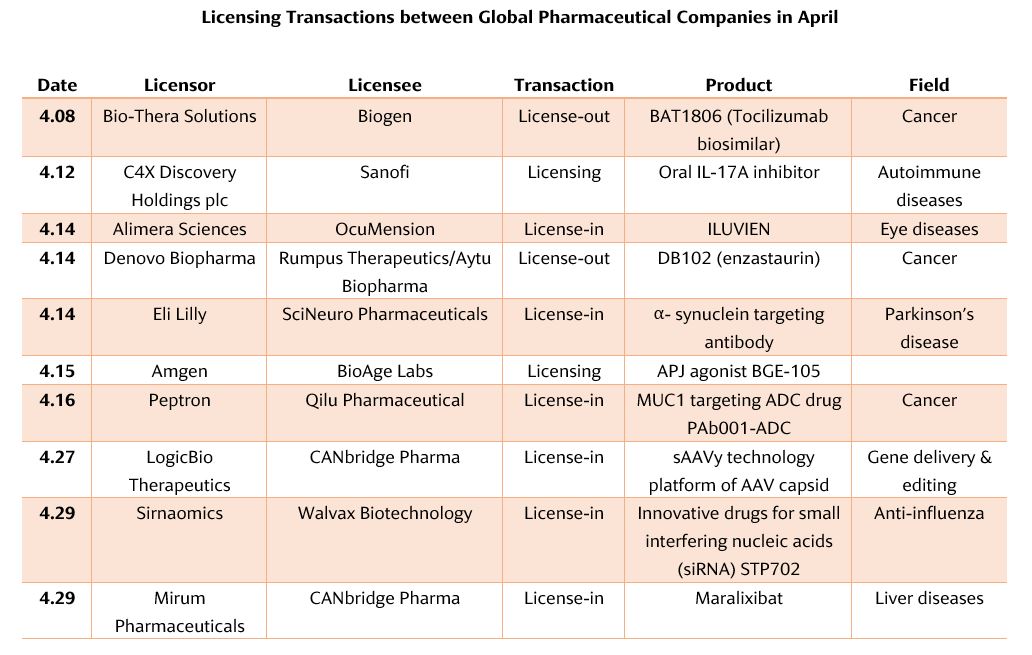 The majority of licensing transactions in April, including Bio-Thera Solutions’ BAT1806 and Denovo Biopharma’s rare disease drug DB102 (enzastaurin) successfully went overseas. BAT1806 is a tocilizumab injection developed by Bio-Thera Solutions in accordance with the relevant guidelines of China’s NMPA, the U.S. FDA, and EU EMA biosimilars. It is a recombinant humanized monoclonal antibody targeting IL-6R. It can be combined with soluble and membrane-bound IL-6 receptors (sIL-6R and mIL-6R) to specifically bind to and inhibit signal transduction mediated by sIL-6R or mIL-6R. In January 2019, phase III clinical trials were initiated.
DB102 is a “first-in-class” small-molecule serine/threonine kinase inhibitor. It acts on key cancer targets such as PKCβ, PI3K and AKT. It has the direct effect of inducing cancer cell death and hindering cancer cell proliferation. The drug was originally developed by Eli Lilly for the first-line treatment of high-risk diffuse large B-cell lymphoma (DLBCL) and brain glioblastoma (GBM), as well as the indirect effect of inhibiting tumor-induced angiogenesis. Denovo Biopharma now has global rights to the drug.